Life Among the Ohio Indians


The various tribes of Ohio Indians differed in their social conditions, customs and practices nearly as much as do the barbarous nations of Asia, from whom some writers suppose the Indians have descended.

The red men were, more or less, nomadic in their habits moving from place to place, as game became scarce, or as they became involved in wars, which made it unsafe for them to remain long in a particular locality.

They usually lived in villages near streams or springs. The structures which formed the villages were wigwams, covered with bark or the skins of wild animals. "In some of the older and larger villages they lived in pole or log houses of a more permanent character. In addition to dwellings of such a character, many villages had what were called long houses, large enough to hold from thirty to fifty families in separate booths or stalls." 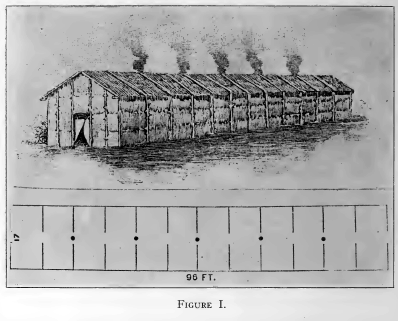 Figure 1 shows a frame house of the Senecas, covered with elm bark. Smoke is seen at regular intervals issuing from five holes in the roof. Under each hole is a stone fireplcae in the middle of the hard, earthen floor, and around each fire pit are four stalls, two on each side and opening on the long passageway that runs through the center of the house with an outside door at each end. This house would have twenty-four compartments, of which twenty would hold each a family, while at each end two stalls were generally reserved for storing provisions. A house occupied by a single family had a fire-pit in the middle of the floor. The foregoing description of an Indian long house is taken from John Fisk's "History of the United States." Nearly all of the Shawanese Indians lived in pole or log houses during the winter months. In addition to the dwellings described, there was, in the chief town of every nation, a building set apart for public purposes, called a council house. This building, as in the example of the long house, was either a frame covered with bark, or a log structure of sufficient dimensions to accommodate a large number of people. In these buildings national and tribal councils were called to debate questions of policy and right.