"To establish a permanent hold of the Ohio and Miami valleys, Governor Hamilton, of Pennsylvania, in 1748, negotiated a treaty with the Twigtwee Indians who occupied the country along the Miami river in what is now Shelby and Miami counties. To preserve the relations of the treaty, he sent out in the fall of 1750, a company of twenty-five men who established a trading post at the mouth of Pickawillany creek, at a point on the Miami river about eight miles south of Sidney. Before the next spring a block house was completed, and several stores and dwellings were erected. The block house and other buildings were surrounded by a stockade, as a protection, in case of sudden attack, both for their persons and property. The stockade consisted of a high wall of split logs set deep in the ground, and having three gateways. Within the inclosure the traders dug a well, which furnished an abundant supply of fresh water during the fall, winter and spring, but failed in summer. At this time Pickawillany contained four hundred Indian families, and was the residence of the principal chief of the Miami Confederacy. Christopher Gist was there in February, 1751, and in his published journal says: 'The place was daily increasing,and was accounted one of the strongest Indian towns on this continent.' In his entry for February 18th, he thus refers to the stockade: "We walked about and viewed the fort, which wanted some repairs, and the traders' men helped them to bring logs to line the middle."

In several contemporary papers it is stated that the fort at Pickawillany was built of stone. If this were the case, remains of the structure ought yet to be visible, but after a careful examination we are unable to find any traces of the kind in the neighborhood of the mouth of Loramie's creek. During the winter and spring of 1751, according to a letter of George Croghan, thirty of the Miamis were killed by the French, presumably on account of their alliance with the English. In January, 1751, three French soldiers, who had deserted from the post at St. Joseph's and St. Mary's, delivered themselves to the English at Pickawillany. The Miamis demanded the Frenchmen for purposes of revenge. This the traders humanely refused to do, and to save their lives sent them to an English trading post on the Muskingum river, commanded by Colonel George Croghan. When the French governor of Canada heard that deserters from his service were received and protected at Pickawillany, he became greatly enraged, and ordered a detachment of two hundred and forty French, Ottawas and Chippewas to proceed to Pickawillany and destroy the post. In May, 1752, Monsieur St. Orr, with his force, left Detroit, and on the 21st of June, at early dawn reached Pickawillany. An attack was immediately commenced, and after a spirited resistance the fort was surrendered. In the skirmish fourteen Twigtwees and one trader were killed. At the conclusion of the surrender all the buildings were burned and the goods appropriated. The English traders, tradition says, were all murdered on their way to Canada. The Twigtwee king, old Britain, was killed and boiled in a kettle, and eaten by the Canadian Indians who accompanied the expedition. 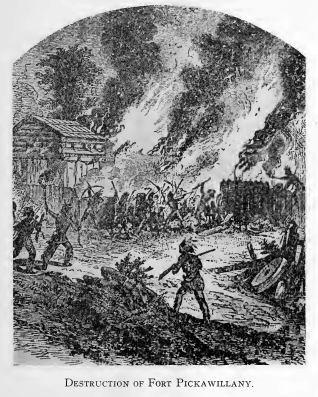 The foregoing history of the post at Pickawillany, is from the journal of Captain William Trent, who was commissioned by Governor Dinwiddie, of Virginia, to carry presents to the Indians at Logtown, and to the Twigtwees on the Miami river. Captain Trent, Thomas Burney, and about twenty Indians visited the ruins of the fort and devastated Indian village, on the 6th of July, but found no one there, the Indians having moved to the Wabash river, eighty miles to the west.

After the fall of Pickawillany Post most of the English traders abandoned the Ohio trade, and the French paid no further attention to it until 1769, when Peter Loramie, a French Jesuit trader, came over from Vincennes and established a store on Pickawillany creek, about nine miles north of its junction with the Miami river. Loramie was a great hater of the English, and his store was, for thirteen years, the headquarters, from which expeditions were sent against the pioneers of southern and eastern Ohio. Loramie so endeared himself to the Indians, that he was able to exercise absolute control over them. "I have," says Colonel Johnston, "seen the Indians burst into tears when speaking of the time when their French Father had dominion over them." Soon after Loramie established his store, other stores were established in what is now Auglaize county. One of them was located on a branch of the St. Mary's river about two miles up the stream from the village of St. Marys. It was what is called a dug-out in the West, that is, the apartments occupied by the traders were excavations made in the bank of the creek, protected in front and on the sides by pickets. But little is known concerning this post, beyond the fact that it was occupied by French traders. They no doubt left at the time General Clark visited Loramie's store.

About the same time that the St. Mary's store was established, Francis Duchouquet and two other Frenchmen established a trading post at Wapakoneta. They built a stockade on the Auglaize river, about half a mile northeast of Wapakoneta on what is known as the Shafer farm. A spring, in the southwest corner of the inclosure, furnished the inmates with an abundance of good water.

This stockade is called Fort Auglaize in some of the earlier histories.

From 1769 to 1782 the pioneers of Cincinnati and vicinity suffered much from the atrocities committed by the Indians sent out from Loramie's store. So noted had the place become in 1782, that General George Rogers Clark marched against it with a regiment of Kentucky volunteers.

At the end of the war with France, Great Britain came into possession of Canada and all that part of the United States which lies between the Atlantic and the Mississippi, with the exception of the little strip at the mouth of the river.