During the summer months the Indians lived in their villages, around which the women and children cleared patches and fields in which they planted corn, beans, squashes, Indian cucumbers, pumpkins, melons and tobacco. The cultivation of the crops devolved entirely upon the squaws and children. The implements used by them were made from sharp bones of animals, tortoise shells, or flat stones. The labor of cultivation must have been much harder for them than for the whites. After the traders came among them they exchanged their furs for hoes and other garden implements. The cultivated products of the Ohio Indians exceeded in quantity those of any other equal area in North America. The great quantities of grain stored away for food, should game become scarce has always been a subject of surprise to students of our early history. The large quantity of corn and other provisions captured at Loramie's store was a matter of great surprise to General Clark and his officers, when they raided that den of atrocities in 1780. It is recorded further, that when General Wayne moved down the Auglaize river on his way to Defiance, that his army marched through four thousand acres of corn at its confluence with the Maumee. Also, that there were thousands of acres between Defiance and the mouth of the Maumee river.

Aside from tilling the soil, the squaws prepared the food and did the cooking. Though done in the rudest manner, it included jerking the venison, bear and buffalo meat, drying wild fruits and pumpkins, husking and storing away the corn, and gathering the wood for the fires. In addition to these duties, there were the duties of preparing wearing apparel, moccasins, baskets, and making maple sugar. All of the latter duties being performed in the interim of the more pressing affairs of life. Indians, ordinarily, dined twice a day,— morning and evening. In the hunting season, and times of excitement, the hours for meals were irregular. Where the families of a clan lived in close proximity they cooked and were fed from the same kettle. "The kettle was kept filled with corn, beans, and venison, from which every one partook when he became hungry."

The only manual labor the men ever did was to make bows, arrows, tomahawks, war clubs, and canoes. The latter were either made of logs slowly burned out and then smoothed with sharp shells, or of birch bark, which the women sewed together with long strong strips of bark from red elm or basswood trees and smeared the seams with spruce tree gum.

"In this manner the summers passed. The women and children tilling the soil, whilst the braves amused themselves in fishing fire-hunting, gambling, or fighting a hostile tribe, or devoting themselves to their toilets — painting, tattooing, and otherwise decorating their bodies. 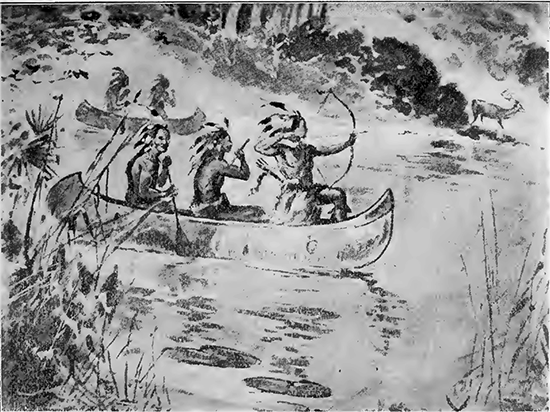 As autumn approached and the leaves began to change color preparations began for the fall and winter hunt. As soon as the nights and mornings became cool, they left their villages for the hunting grounds. Then it became the duty of the women to carrv the luggage. Their mode of proceeding has thus been described: "The master of the family, as a general thing, went ahead, leisurely bearing a gun, and perhaps a lance in his hand. The woman followed with the mats, poles and other necessaries, and not infrequently the household dog perched on the top of all. If there was a horse or pony in the list of family possessions the man rode and the squaws trudged after him. It has been asserted by way of apology by some persons, said to be versed in Indian character, that this unequal division of labor was the result of no want of kind affectionate feeling on the part of the husband. It was rather the instinct of the sex to assert its superiority of position and importance when a proper occasion was afforded. When out of the reach of observation, and in no danger of compromising his own dignity, the husband was willing enough to relieve his spouse from the burden that custom imposed upon her. Thus their winters were spent in hunting the deer, the otter, the bear and the buffalo. And when they were admonished by budding trees, and flowers, and grass, and the return of singing birds that spring had come, they gathered again in their villages."